If you are looking for marriage I am going to share the marriage prediction for all zodiac signs by 2018 in the current post. Let’s start with the first zodiac sign Aries. 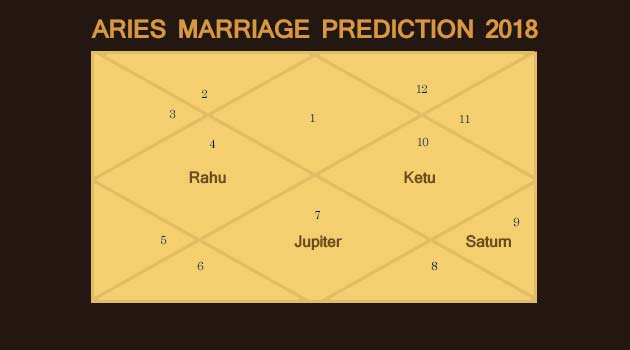 For the Aries natives, Jupiter is friendly for stepping in marital relationship in 2018. However, Jupiter would be able to facilitate the marriage only when Mars makes a transit from Libra to Scorpio.

Mars, when placed in the house of Scorpio, would be positively influencing the Aries ascendant to get married. Rahu and Ketu, the shadowy planets, do not provide ideal circumstances for marriage, and keep on deceiving the native. However, Jupiter, one of the most powerful predictors of marriage, holds the inevitable might and would pave the way for marriage once Mars makes a move in Scorpio. 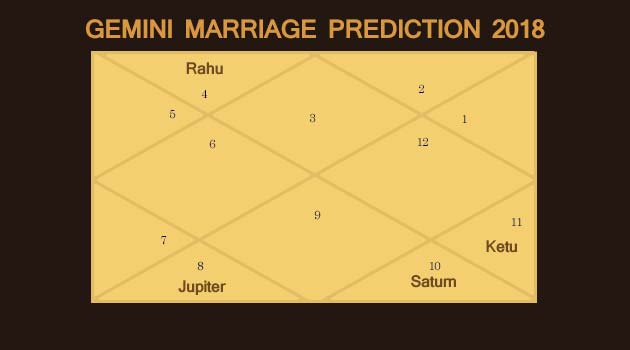 However, a small ray of hope exists in the form of Jupiter’s transit. When Jupiter transits from Libra to Scorpio (December 2018), chances of marriage would turn bright. 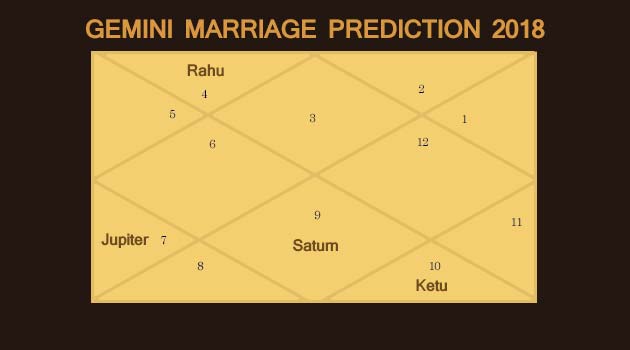 Till the time Jupiter stays in Libra sign, chances of multiple relationships are strong. These relationships would indicate the chances of a marriage, but only in false hopes. There are strong chances that the person will have to stay away from home.

For all the efforts made by the person, hopes would be high for the eventual positive outcomes, but the final result is most likely to be postponement of marriage.

Initial three months of 2018 are auspicious in nature and may bring some good news to the native, especially from the perspective of relationships. But to the despair caused by the unconquerable will of destiny, even this period is not friendly to be getting married. Hence any questions of marriage prediction should receive a reply in negation, unless of course the birth planets are strong.

From middle part of 2018, chances would build up for marriage to happen. 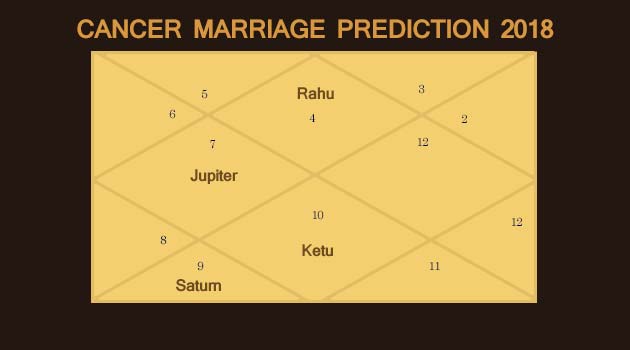 These ascendants will build castles in air, especially related to the aspects of marriage. They will experience strange, often very forceful intuitions. They would be anxious, confused and living in a world of illusion, where seemingly false images appear as the real ones.

Their vision would be hindered by a veil, the veil of ‘maya’ as per the will of destiny, and they would not be able to differentiate between the real and unreal.

For initial three months, there are no chances of a marriage taking place.

When Jupiter turns ‘retrograde’, slim chances of marriage would surface and depending over the natal placement of planets, marriage might happen or not. In any case of marriage prediction, the role of birth planets holds stellar importance. If they are powerful, in friendly houses, without any considerably malefic influence, they may change the course of destiny by bringing positive and beneficial outcomes. 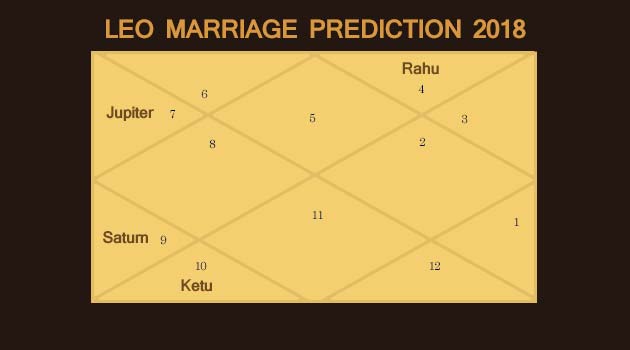 Jupiter is very friendly for the Leo ascendant to get married in 2018. For the Leo native, Jupiter is Lord of fifth house, the house of love. Other major planets will, however, offer many obstructions to the chances of marriage. Ascendant would be prone to get misguided by people around, especially elder ones in the family and inner social circle. There are enough indications in the planetary pattern of 2018 to opine that elders would help arranging or fixing the marriage, but ultimately fulfilment of the objective i.e. marriage, is unlikely to happen.

Marriage prediction for Leo natives, for 2018, suggests that initial 3-4 months are inauspicious for marriage with strong resistance offered by the planets responsible for marriage.

As Sun transits from Aquarius sign to Pisces, good chances of marriage would surface. 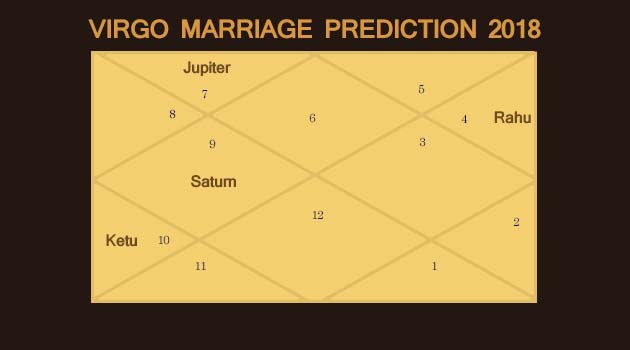 These persons are in exceedingly beneficial situation for all the auspicious events. They will feel that the wheel of destiny is being operated by them and whatever they think, or aspire for, or aim at, is turning into a reality. Excellent chance of love marriage stands true for them in 2018.

Till the time Mars is placed in Libra sign, distinct yoga of fights and conflicts in relationships exists. However, as Mars shifts its house, situations will gradually change. During the transit of Mars in Scorpio, good experiences would be there in relationships, with a strong possibility of marriage. During its transit to Sagittarius, Mars would offer obstructions to easygoing and natural flow of close relationships. As Mars transits to Capricorn, excellent results would be seen with respect to the relationships, especially marriage. 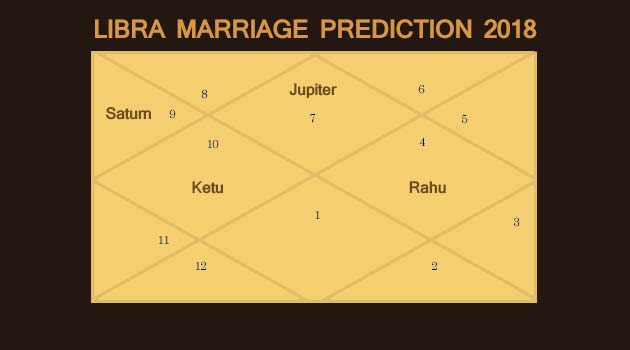 These natives are required to do strenuously hard work, not just to earn a living, but to get anything done. They are, in their inner space and ethereal existence, not yet ready for marriage. They have too many tasks in hand which they have to fulfil. They will toil hard to prove their mettle in the sphere of work, and it is evidently clear that marriage is not one of those prime objectives for them during this time period.

With the transit of Mars in Scorpio, chances of arranged marriage could blossom in their marriage horoscope, however to the candidates of love marriage, even this transit offers no hope. Chance of arrange marriage is conducive to the native except when Mars resides in Capricorn, Aries and Virgo.

The starting fortnight of 2018 will see the conjunction of Sun and Saturn in Sagittarius, which will make the matters of love life intriguing and complex. 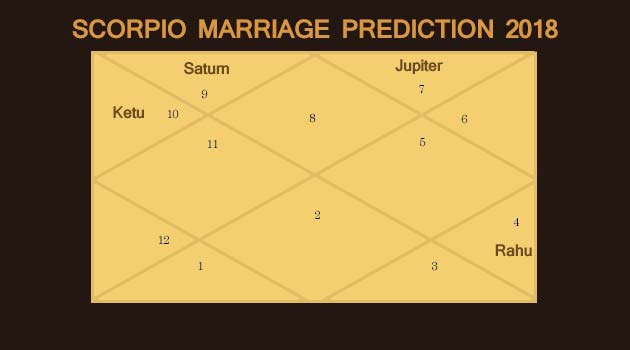 The natives are at that juncture of life in which any good news is a distant dream. The family atmosphere, living state, and surroundings would be stressful and inauspicious. Natives should set it a priority to rectify their living environment by taking appropriate steps.

In their thoughts, actions and inner existence, such natives would be occupied with disappointments, sorrows, confusions and profound anxiety.

They stand practically no chance of getting married in 2018. Marriage prediction is a vast and multi-layered topic, mandating in-depth knowledge of Vedic astrology, and a certain subtle relationship with the spiritual wisdom. 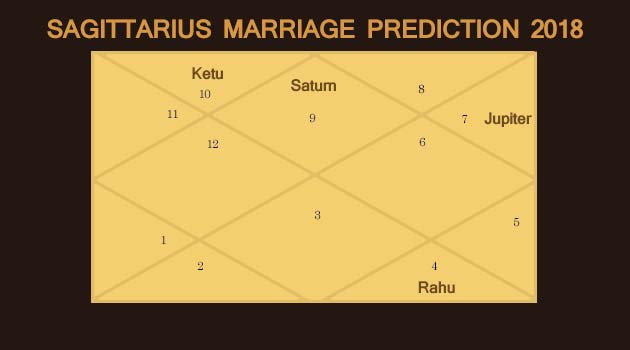 This is an excellent time for you to lead from the front, and reap the fruits of your destiny. Things not just appear to be in your hands, they actually are. Till the time Mars resides in Scorpio, Sagittarius and Capricorn, it will offer obstructions to the marriage horoscope, and to otherwise seamless flow of pleasant events and auspicious activities. As Mars stations itself in Aquarius, good yoga is formed for marriage.

Marriage may also happen during the periods of inauspiciousness of Mars (transit in Scorpio, Sagittarius and Capricorn), but for this to take place, birth stars must be decisively strong and in friendly positions with respect to marriage.

Precautions must be taken with respect to the health issues, especially pertaining to that of mouth, face and teeth. 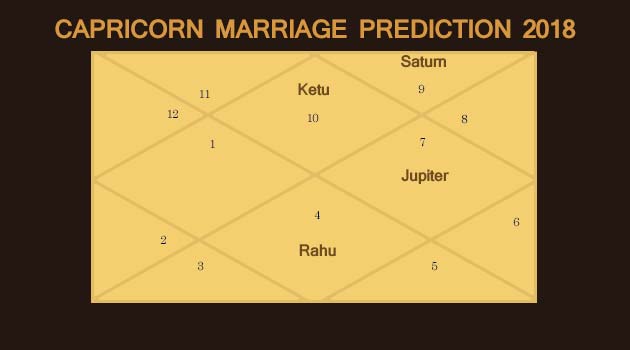 These natives will experience getting pulled by the chains of destiny in all the directions. They will remain in a state of dilemmas, confusions and weak thought processes. They will not be able to make a firm mind about the eventualities of life, especially the ones they encounter in 2018.

Strong chances for re-emergence of old marriage proposals exist, even for the ones which were refused. There might appear many options of marriage for the natives, but to no avail. The fulfilment of marriage and relationships related desires will not take place. A certain mystery envelops the mind of these natives with regard to their visions, experiences and objectives. They will continue to remain in the state of false hopes, mighty confusion, and, suspended survival of the soul, finally succumbing to the will of the destiny. 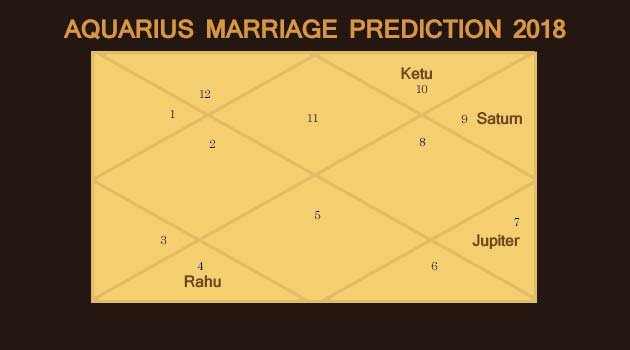 This is a very auspicious time for marriage. You will earn respect from society, and gain glory in all the spheres. Bright chances of professional development and opportunities in workplace are there. You can be placed in an honourable government job, and earn laurels in the society.

The month of January would be relatively rough for the wheels of destiny. However, the time to follow is exceptionally good. Marriage horoscope clearly shows strong possibility of getting married. Native would be experiencing pleasant, blissful and inspiring dreams. 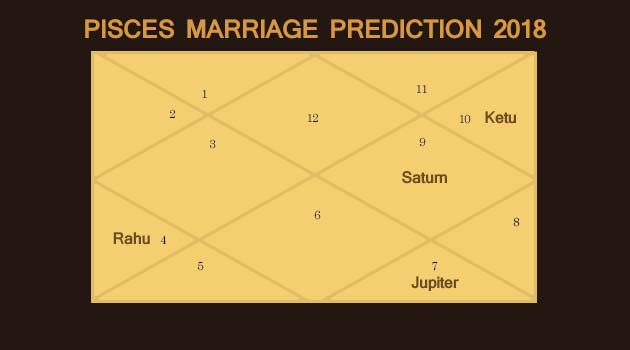 The year of 2018 does not offer much promises or opportunities. Obstructions and stumbling blocks in the path of career would keep the native’s inner outlook bleak. If a person suffers with serious uncertainty, will he be in a state of mind to marry, or in the state of enjoying marital bliss? The native must put away the inertia and lethargy as this is the time to focus on career. If optimal efforts and inner energy are not channelized to the cause of profession, there are chances that professional setback waits for you just round the corner. The position of Saturn would inspire you to work hard in your professional front.

Till Jupiter resides in Libra (November 2018), you stand practically no chances of likelihood of a marriage. By the end of 2018, however, chances could emerge. Marriage astrology not just deals with the planets of transit, but nature, placement, aspects and conjunctions of birth planets are also to be studied deeply. In case, birth stars are aligned in a favorable state, the possibility and outcome of events may change.