Why should one never read their Kundli?

In this day and age, the world has witnessed a significant number of successful, possibly the best-qualified people drawn to astrology, the first experience with an astrologer takes place when they reach the process where depression arises in their Kundli. These idealistic, talented, enthusiastic researchers are struggling to fight with both the attempts and odds. Still, instead, they avert their minds to the other variants that they’ve been rectifying without taking into consideration for far too long.

This experience brings them not just to the awareness of astrology, but also to the sacred knowledge of the Hindu scripture. Many individuals do not want to learn how to fix the issues, but they are more interested in understanding the course of the challenges they face.

This way, they don’t truly desire to go to an astrologer. Instead, they want to know everything on their own. And they often don’t honor the different rules that the standard astrologers follow and preach is – Never read your Kundli on your own.

Consequences of reading your Kundli

Everybody reads their kundli, and there are hardly any exceptions, but if there is any justification to prevent reading your birth chart? A possible explanation can only be emotional and not practical and rational.   The way a doctor does not diagnose and treat himself or let his apprentices do the same, let alone a common man, is similarly advised for everyone not to analyze their kundli.

As a matter of fact,  our Vedas and shastras are to be regarded as a statute for validating the acts of a person; it is absent in that practice. In other terms, it will not prevent someone from learning astrology for not doing the same thing with their own convictions. Although with the human psyche, we have also seen people become more sentimental and less rational. They don’t even obey the guidelines on the discipline of astrology for a long time, and instead, they bring in Veda Dosha. Also though astrology is a major component of Veda, the incorrect practice of the same can result in Veda Dosha. Again, several times, it has been shown that if one is to test one’s birth chart, they are much more prejudiced than realistic.

Eventually, the science of astrology often claims that the general reading of the kundali isn’t really a source of entertainment at all. Even though it is regarded as the eyes of the Vedas, its objective should only ever be used it is of the utmost seriousness.   It’s a complex study, so not considering it sincerely is tragic.  Thus it is recommended, especially to those that are half-backed with awareness and information, don’t read your kundli by yourself. 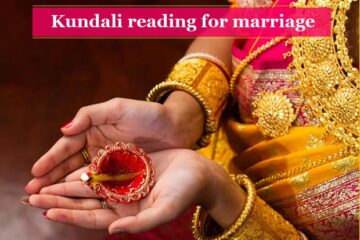 Significance of Kundali Reading for Marriages

Get Kundali Reading for marriage if you are Struggling for marriage. Here is what you can do. Just give your date of birth data & we will send you an analysis. This is a one-time Read more…

Free Online Kundali Reading vs. Astrologer: Which One is Better

Whether it’s predicting the marriage date or suggesting solutions for life troubles, Kundali reading is a common practice in Hinduism for most events or scenarios. While kundalini is prepared by an astrologer, many people use Read more…

Kundali Reading and its influence on important decisions

The world that we live in is full of stress, challenges, and doubts. There is not a single day that goes without decisions. A decision could be big or small, significant or routinely, happy or Read more…